Get Tough on Dog Fighting 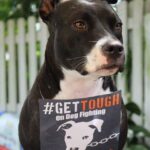 Legendary actor Patrick Stewart urges animal lovers to #GetTough on dog fighting via social media New York, N.Y.—To kick off its National Dog Fighting Awareness Day campaign on April 8, the ASPCA®(American Society for the Prevention of Cruelty to Animals®) has partnered with legendary actor Sir Patrick Stewart to raise awareness on the prevalence of dog fighting in the U.S. […]

A nationwide poll of law enforcement released today by the ASPCA® (American Society for the Prevention of Cruelty to Animals®) exposes serious obstacles for law enforcement to investigate one of the most horrific forms of animal cruelty—dog fighting. The release of the findings coincides with National Dog Fighting Awareness Day (April 8), a day created […]

NewYorkCityDog.org is committed to keeping local dog lovers informed and entertained.  We’ll keep you up-to-date on local news and events, shelters and dog-friendly activities. By bringing all of the elements and resources together in one canine-centric matrix, NewYorkCityDog.org will be your … END_OF_DOCUMENT_TOKEN_TO_BE_REPLACED