A new study recently published in the Journal of Clinical Child & Adolescent Psychology found that children experiencing stress who then interact with therapy dogs benefit from improved mood and reduced anxiety. Titled, “The Inﬂuence of Interactions with Dogs on Affect, Anxiety, and Arousal in Children,” researchers from Yale University reported that unstructured interactions with a therapy dog boosted children’s positive emotions following a moderate stressor compared with children who received a soothing object (a soft blanket) or those who simply waited a short time without intervention. Children who interacted with a dog also had reduced anxiety compared with those who waited. 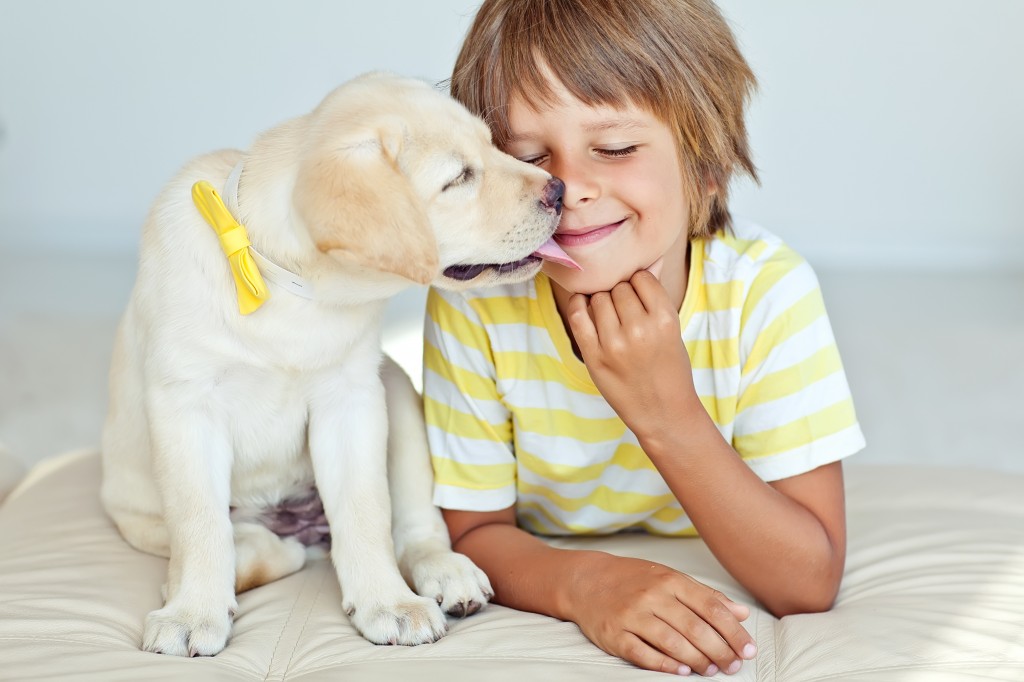 “What’s exciting is that the study gets us closer to answering the question of whether there is something special about dogs in terms of their ability to help children recover from stress. They are doing something better than another common coping strategy – tactile stimulation from a soothing object – and that merits additional research so we can build effective and efficient interventions,” said lead study author Molly K. Crossman, a Ph.D. candidate from the Department of Psychology at Yale University.

The Good Dog Foundation helped to establish study protocols that elucidated the treatment effects of dogs while prioritizing both human and dog safety and welfare. The organization also provided certified therapy teams to participate in the study.

“We are grateful to The Good Dog Foundation for their role in helping to establish the dog selection and care protocols, and for connecting us with a number of exceptional therapy dog teams, who were essential to the project’s success,” Crossman added.

Human-dog therapy teams are widely available in healthcare and educational settings across the United States. The study states that “interactions with animals represent a promising way to reduce the burden of childhood mental illness on a large scale,” and, while more research is needed, their presence is increasingly supported by a growing body of science on the efficacy of animal-assisted interactions. The Human Animal Bond Research Institute (HABRI) funded the study to better understand the emotional and physiological effects on children brought about by canine members of therapy dog teams. Studies have previously evaluated the effects of dogs and handlers together, while this study examined the impact that a dog alone might have.

“The Yale team effectively spotlighted two important findings: that dogs, all by themselves, can improve children’s mood and ability to cope with anxiety, and that they can do so as a therapeutic intervention for stress recovery,” says HABRI Executive Director, Steven Feldman.

This study included pre-teen children (ages 10-13) because they are particularly susceptible to barriers to treatment such as perceived stigma, discomfort talking about mental health problems, and wanting to cope independently, plus therapy dogs are already in widespread use for children of this age group. The children were randomized into three groups: those who played with a dog, those placed in a tactile-stimulation control group with a soft blanket, and those in a waiting control group.

Among the dogs (four male, four female) that contributed to data collection, all were certified as therapy dogs by The Good Dog Foundation or another therapy dog organization (e.g., Pet Partners), or had successfully completed an equivalent behavioral evaluation. In advance of exposure to children, all dogs were familiarized with the laboratory setting and screened for appropriateness for the study procedures.

To protect the safety and well-being of the human and canine participants during the 15-minute interventions, an experimenter supervised all interactions from the corner of the room. The dogs’ own handlers additionally observed from behind a two-way mirror. Children’s physiological stress was tested via their salivary cortisol levels in all study arms.

The Good Dog Foundation Board Director, Heidi Greene, and her dog, Deuce, who participated in the Yale study, have been working together as a certified therapy team for over a decade. “We mostly volunteer at psychiatric facilities and with kids in reading programs,” says Ms. Greene. “We’ve witnessed how a brief visit and cuddle from Deuce can bring needed comfort. But, working with the study group at Yale to help codify how dogs help humans heal was thrilling, a particular privilege. As an organization, The Good Dog Foundation is committed to initiating and participating in research with esteemed academic partners like Yale. It’s part of our mission to broaden the evidence base for and our understanding of human animal interaction.”

In addition, children who played with a dog had significantly lower anxiety scores than participants in the waiting control condition (a mean difference of 3.63 points, 95% CI [1.25, 6.01], p = .003, d = 0.86). There was no statistical difference detected between those in the tactile-stimulation control condition (p = .065, 95% CI [−0.14, 4.65], d = 0.53) and those who interacted with the dogs. Participants who interacted with the dogs did not differ significantly from other participants in salivary cortisol, an indicator of physiological stress.

To access the study findings published in the Journal of Clinical Child & Adolescent Psychology, copy and paste the following link into your browser: ≤https://www.tandfonline.com/eprint/cnywaDrT26B2VjnbarWd/full≥

NewYorkCityDog.org is committed to keeping local dog lovers informed and entertained.  We’ll keep you up-to-date on local news and events, shelters and dog-friendly activities. By bringing all of the elements and resources together in one canine-centric matrix, NewYorkCityDog.org will be your … END_OF_DOCUMENT_TOKEN_TO_BE_REPLACED