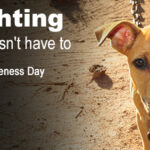 The ASPCA has officially designated April 8 National Dog Fighting Awareness Day (NDFAD) to raise awareness about dog fighting brutality, including little-known truths about the blood sport and its continuing prevalence in America. And – you can help them raise awareness!  The issue has gained some attention with the recent signing of Michael Vick with […]

NewYorkCityDog.org is committed to keeping local dog lovers informed and entertained.  We’ll keep you up-to-date on local news and events, shelters and dog-friendly activities. By bringing all of the elements and resources together in one canine-centric matrix, NewYorkCityDog.org will be your … END_OF_DOCUMENT_TOKEN_TO_BE_REPLACED