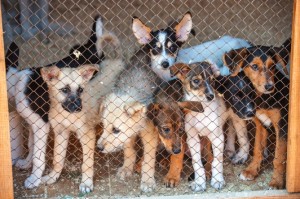 The ASPCA (American Society for the Prevention of Cruelty to Animals) today denounced the brazen inadequacy of the U.S. Department of Agriculture’s (USDA) “refined” database of inspection reports of commercial dog breeding facilities licensed under the federal Animal Welfare Act (AWA). The abridged database and search tool, revealed Friday by the USDA more than seven months after it abruptly removed the data, eliminates information which had been publicly accessible for over a decade, shielding bad breeders from public accountability.

“Animal advocates, consumers, and government officials have relied on the USDA’s database to track enforcement against commercial breeders, many of whom raise dogs in deplorable conditions. This revision fails to protect vulnerable animals from suffering and cruelty, which is a prime responsibility of the USDA. Instead, it continues to protect animal industries looking to hide their practices from public scrutiny,” said Matt Bershadker, ASPCA President & CEO. “Public access to these records is especially important given the USDA’s shamefully weak enforcement of the federal Animal Welfare Act. We urge the USDA to immediately restore full access to this critical animal welfare inspection and enforcement information and stand by its responsibility to act in the best interest of the animals it’s obligated to safeguard.”

Despite a massive public outcry from members of Congress and more than 120,000 people who signed the ASPCA’s petitiondemanding that inspection records be restored, the USDA’s revised database still redacts critical identifying information, including breeder names, addresses, and federal license numbers. These deliberate omissions make the tool essentially useless in efforts to monitor puppy mills and advocate for increased protections for dogs who languish in substandard breeding facilities.

USDA inspection reports provide critical information about the commercial dog breeding industry, as well as the agency’s enforcement of AWA violations. In addition to educating the public on the inhumane conditions commonly found at USDA-licensed breeders, the reports are a vital tool in passing and enforcing laws that better protect breeding dogs. Now, states can no longer rely on the database to enforce existing laws prohibiting pet stores from selling animals raised by breeders with AWA violations.
\

The USDA also announced that the agency no longer plans on posting enforcement actions online, meaning the USDA cannot be held accountable for its investigative and enforcement responsibilities. This, combined with the redaction of information identifying the majority of breeders, means that the public will no longer know whether the USDA has pursued penalties against a breeder violating the AWA, which was passed 51 years ago this week to ensure animals in commercial facilities are protected.

While the USDA insists that animal welfare inspection records are still obtainable through Freedom of Information Act (FOIA) requests, the ASPCA’s recent records requests reveal that the USDA has begun suppressing critical information via FOIA. Documents received are heavily redacted, allowing animal abusers to operate without accountability. The backlog for FOIA requests has jumped from 636 requests in January to 1,138 requests currently, resulting in crippling wait times.

For more information about the ASPCA and to join the ASPCA Advocacy Brigade, please visit www.aspca.org.

NewYorkCityDog.org is committed to keeping local dog lovers informed and entertained.  We’ll keep you up-to-date on local news and events, shelters and dog-friendly activities. By bringing all of the elements and resources together in one canine-centric matrix, NewYorkCityDog.org will be your … END_OF_DOCUMENT_TOKEN_TO_BE_REPLACED