(special signing with Bernadette and Malcolm at 12 noon )

Bernadette Peters and Broadway Barks have established the annual Mary Tyler Moore Award, which will be given out each year at the event to an individual or group who has changed the lives of homeless animals in a way that encourages others to do the same. 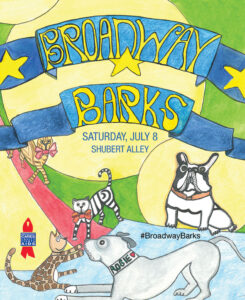 This inaugural award will be given to Sophie Gamand, the award-winning French photographer and animal advocate who lives and works in New York City.  Since 2010, Gamand has been focusing on humans and dogs and their relationships. Gamand travels throughout the USA photographing shelter animals to help bring awareness to their fate and help find them permanent homes.

Gamand has won several prestigious photography awards for her work (including the 2014 Sony World Photography Award), as well as advocacy awards for her dedication to animal rescue and adoption.  Sophie’s two well-known photography series are Wet Dog and Flower Power, Pit Bulls of the Revolution. Her work has also been published in the press worldwide, online and in print, i.e. Buzzfeed, Huffington Post, and Oprah Magazine. Her first book Wet Dog was published in October 2015.

The award was created as a lasting honor to Moore, the legendary stage and screen actress who co-founded Broadway Barks with Peters in 1999. Moore passed away earlier this year.

The 19th annual Broadway Barks, the star-studded dog and cat adoption event benefiting New York City animal shelters and adoption agencies, will feature celebrities from the hottest shows currently on Broadway.  The July 8, 2017, event, produced by Broadway Cares/Equity Fights AIDS, will take place in Shubert Alley (located between 44th and 45th Streets, between Broadway and Eighth Avenues). Festivities begin at 3 p.m.; celebrity presentations of adoptable pets take place between 5-6:30 p.m. The rain or shine event is free and open to the public.

Early birds get a special treat at 12 p.m., when this year’s hosts, Bernadette Peters and Malcolm McDowell, will appear in the alley and sign copies of the 2017 Broadway Barks poster and Playbill designed by Kelly McDowell. Posters, Playbills and official merchandise will be for sale with 100% of the proceeds to benefit Broadway Barks.

James Barbour (Phantom of the Opera)

Petrina Bromley (Come From Away)

Jenn Colella (Come From Away)

Alma Cuervo (On Your Feet! The Musical)

Susan Dunstan (Come From Away)

Kim Exum (The Book of Mormon)

Kendra Kassebaum (Come From Away)

Nic Rouleau (The Book of Mormon)

Caesar Samayoa (Come From Away)

Brian Sears (The Book of Mormon)

Broadway Cares/Equity Fights AIDS is one of the nation’s leading industry-based, nonprofit AIDS fundraising and grant-making organizations. By drawing upon the talents, resources, and generosity of the American theatre community, since 1988 BC/EFA has raised more than $285 million for essential services for people with AIDS and other critical illnesses across the United States.

Broadway Cares/Equity Fights AIDS is the major supporter of the social service programs at The Actors Fund, including the HIV/AIDS Initiative, the Phyllis Newman Women’s Health Initiative and the Samuel J. Friedman Health Center for the Performing Arts. Broadway Cares also awards annual grants to more than 450 AIDS and family service organizations in all 50 states.

NewYorkCityDog.org is committed to keeping local dog lovers informed and entertained.  We’ll keep you up-to-date on local news and events, shelters and dog-friendly activities. By bringing all of the elements and resources together in one canine-centric matrix, NewYorkCityDog.org will be your … END_OF_DOCUMENT_TOKEN_TO_BE_REPLACED