As the ASPCA® (American Society for the Prevention of Cruelty to Animals®) approaches the four-year anniversary of its Behavioral Rehabilitation Center pilot program, staff members prepare seven dogs – the last group of canine “graduates” – who have successfully completed the rehabilitation program for adoption with rescue groups and shelters in New Jersey and New York. Based at St. Hubert’s Animal Welfare Center in Madison, N.J., the ASPCA Behavioral Rehabilitation Center is the first-ever facility dedicated solely to the rehabilitation and study of canine victims of cruelty and neglect—primarily those rescued from puppy mills, hoarding situations and dog fighting rings—who suffer from severe fear and anxiety that prevent their adoption. The ASPCA will be relocating and expanding its behavior rehabilitation program to a permanent facility in Weaverville, N.C.—scheduled to open later this year—where it will provide research-based training for shelters around the country, as well as greater capacity and more resources to help traumatized dogs.

The ASPCA launched the Center as a pilot program in March 2013 and has since helped hundreds of homeless dogs suffering from debilitating behavior issues. Sheltering professionals from 20 states were also invited to visit the facility to observe behavior rehabilitation techniques and apply key learnings to help homeless dogs in their own communities.

Meet Ramiah, one of the recent grads.  After her rescue, shelter staff was quick to surmise that she was extremely fearful and enrolled her at the Canine Rehab Center.  Much love and much training have shown Ramiah that life can be good.  She’s ready for her forever family – hopefully with at least one other dog in the house – to play, cuddle and chase.  You can learn more about Ramiah at Sammy’s Hope where she will await the perfect match. 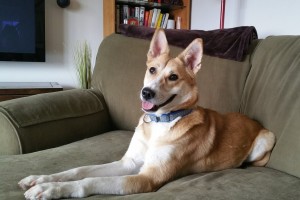 “Through this unique program, the ASPCA has gained a tremendous amount of insight into behavioral rehabilitation, and provided second chances for dogs who might otherwise be euthanized for behavior issues,” said ASPCA president and CEO Matt Bershadker. “We thank St. Hubert’s for being an invaluable partner in making our pilot program possible, and finding safe and loving homes for at-risk dogs who completed our rehabilitation program. We’re thrilled to build a permanent facility where we can put countless more fearful, at-risk dogs on the path to recovery and adoptability.”

“It has been our privilege to work with the ASPCA and these deserving animals over the past four years,” said Heather Cammisa, president and CEO of St. Hubert’s Animal Welfare Center. “We know firsthand the hard work and heart that went into the successful development of new tools and methods to help animals and shelter and rescue colleagues far and wide. It has been a beautiful, productive relationship and we will miss our ASPCA family in the building while continuing to work together in other capacities to help animals and communities.”

At the Center, a dedicated team of animal behavior experts and support staff work daily with these dogs by implementing scientifically sound techniques to reduce their fear of people, as well as to gradually acclimate them to unfamiliar objects, sounds, living areas, and real-life situations that can induce trauma and severe stress. ASPCA behavior experts have been conducting a research study that they intend to share with shelters and rescue groups around the country so that these groups will be better equipped to rehabilitate homeless dogs from similar backgrounds and save more lives. The program is showcased in an award-winning ASPCA documentary, “Second Chance Dogs,” which is currently available on Netflix.

“The progress we’ve made since the opening of the Center nearly four years ago is remarkable,” said Kristen Collins, senior director of ASPCA Anti-Cruelty Behavior Rehabilitation. “We’re proud of what we’ve accomplished so far, and we look forward to continuing and advancing the work at our new permanent facility, where we will expand our ability to train visiting professionals as well as rehabilitate animals.” 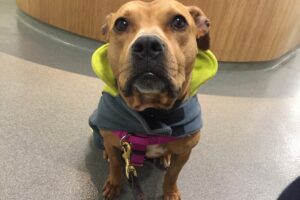 This is Franny, she is approximately 3 years old.  Rescued from a dog-fighting ring, she is now a fun-loving, social girl who loves the company of canine companions.  Franny is available at Rescuezilla, in Hoboken.

For more information on the ASPCA Behavioral Rehabilitation Center and stories of individual dogs who have successfully graduated the program, please visit www.aspca.org/BehavioralRehab

NewYorkCityDog.org is committed to keeping local dog lovers informed and entertained.  We’ll keep you up-to-date on local news and events, shelters and dog-friendly activities. By bringing all of the elements and resources together in one canine-centric matrix, NewYorkCityDog.org will be your … END_OF_DOCUMENT_TOKEN_TO_BE_REPLACED