The Westminster Kennel Club has arranged shuttle buses to transport exhibitors and spectators directly from Hotel Pennsylvania to Piers 92/94 throughout each day – visit hotelpenn.com for details. The Groups, Junior Showmanship Finals and important Best In Show will still be held at Madison Square Garden, directly across the street from Hotel Pennsylvania. 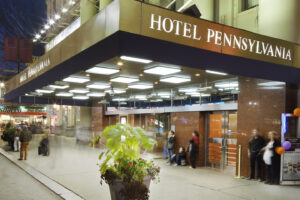 “We are ‘paws’-itively excited to be welcoming back all of the Westminster VIP’s (Very Important Pooches),” said Gene Nicotra, General Manager/All Dogs’ Best Friend at the Hotel. “Our perfect location and exclusive amenities are a treat for all Westminster hopefuls and fans alike.”

New York’s Hotel Pennsylvania is the only hotel for Westminster competitors and they know it. From ‘pup’tual Westminster wedding ceremonies to hosting an annual Pet Fashion Show, the Pet Friendly Hotel of the Year always goes the extra mile. To prepare for this special event, the hotel is planning to set up a variety of exclusive onsite daily events and amenities to coincide with the Show exclusively for guests, including:

– Hosting the largest in-door doggie spa in all of New York, our new and improved Room To Groom Dog S’paw’ offers canines everything they need to get ready for the Show: bathing tubs, dog grooming area, exercise/fitness area, and an in-house relieving area.
– Direct shuttle bus service for Dog Show exhibitors and spectators from the Hotel to Piers 92/94 each day (courtesy of Westminster).
– Exclusive welcome package for Westminster guests.
– Hosting the 2015 New York Pet Fashion Show taking place on February 12th; starting at 6 pm EST.
– A live Westminster Kennel Club broadcast satellite feed from the Hotel’s Lobby on the morning ofFebruary 13th.
– Hosting the Progressive Dog Club events at the PennTop Ballroom from February 13th throughFebruary 15th.
– Hosting a live three-hour radio broadcast of Talkin’ Pets with Jon Patch on February 14th from 5 pm to 8 pm EST.
– Hosting the 2015 Dog Writers Association of America Annual Awards Banquet on February 15th.
– Our exclusive on-site Doggie Concierge will be working ‘doggone’ hard to attend to all canine requirements (such as ‘pup’arazzi interviews and hotel tours).
– Additional vendor opportunities are available.
…and so much more! Visit hotelpenn.com for full details.

As a bonus for our Dog Show guests, should their dog win ‘Best in Show’ their entire Hotel stay with us will be complimentary!

New York’s Hotel Pennsylvania is offering unbeatable room rates for Westminster guests. To stay at the host hotel where all the Westminster Dog Show action happens, contact 212-736-5000 (locally) or 800-223-8585 (toll-free) or visit hotelpenn.comtoday.

Westminster is the oldest, continuous sporting event in America, with the exception of the Kentucky Derby.  The Dog Show is the most prestigious of National Dog Shows and has been held every year despite power shortages, hazardous weather conditions, economic depressions and World Wars.

About New York’s Hotel Pennsylvania
Since 1919, New York’s Hotel Pennsylvania has been host to millions of visitors to Manhattan, more than any other hotel in the world. The hotel is one of only two hotels in Manhattan to earn the prestigious ENERGY STAR award, which exemplifies superior energy performance and efficiency. With 1,700 rooms and over 90,000 square feet of function and adjacent exhibit space, the hotel’s location on 7th Avenue at 33rd Street is conveniently located to the Midtown business district and within walking distance to many ofManhattan’s famed tourist attractions, including Times Square, the Theater District and the Empire State Building. Directly across from Penn Station and Madison Square Garden, with most major subway lines within one block makes getting to and around Manhattanexceptionally easy. Reservations can be made on-line at www.hotelpenn.com or by calling 212-736-5000 or toll-free at 800-223-8585. The World’s Most Popular Hotel is a registered trademark of New York’s Hotel Pennsylvania.

NewYorkCityDog.org is committed to keeping local dog lovers informed and entertained.  We’ll keep you up-to-date on local news and events, shelters and dog-friendly activities. By bringing all of the elements and resources together in one canine-centric matrix, NewYorkCityDog.org will be your … END_OF_DOCUMENT_TOKEN_TO_BE_REPLACED