While the exact origin of the German Shorthaired Pointer is unknown, what is known is that they were bred to create an enthusiastic weekend hunting dog that also made a great family companion and watchdog. What resulted was a dog with the clean lines, keen nose, and good looks of a Pointer, as well as the loyal, even temperament of a lapdog (although their size may require a rather large lap!). Full of energy and happy to be included in a sporting adventure, German Shorthaired Pointers make great companions for active families. 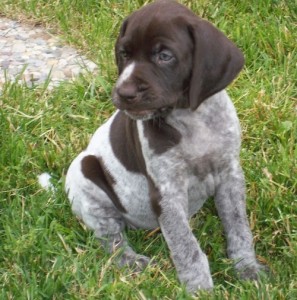 Size & Weight: German Shorthaired Pointers stand from 21-25 inches at the shoulders and weigh in between 45-70 pounds, with males being larger than females. They have long, streamlined bodies that are typical of most Pointer breeds.

Coat & Color: German Shorthaired Pointers have short, thick coats that are water resistant and keep them warm in cold weather. Their coat color can be solid liver or a combination of liver and white, and serve as camouflage in snowy weather.

Equal parts brains and brawn, German Shorthaired Pointers are very intelligent dogs with great athletic ability. A dog originally bred for hunting, they possess not only a great nose, but can point, track, and retrieve on land or in water, making them versatile, sturdy hunting dogs. They also rank as the 17th most intelligent breed of dog and are highly trainable, often performing well in obedience tests, as well as with simple at-home commands like sit and stay. More than just hunting animals, German Shorthaired Pointers are very loyal and even-tempered companion dogs that can make a great family pet in the right home. Their endless dose of energy does require daily exercise, so they are best suited for an active family—they’re very happy to tag along on the morning run! 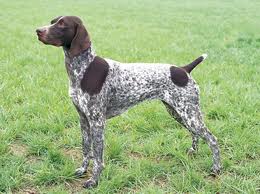 Something to Bark About: German Shorthaired Pointers have been highlighted in many literary works for their superior hunting skills. Two works of non-fiction—Run, Rainey, Run and Colter: The True Story of the Best Dog I Ever Had—have delved deeper and explored the authors’ extraordinary relationships with their beloved dogs (I’d say the Colter title says it all!).

NewYorkCityDog.org is committed to keeping local dog lovers informed and entertained.  We’ll keep you up-to-date on local news and events, shelters and dog-friendly activities. By bringing all of the elements and resources together in one canine-centric matrix, NewYorkCityDog.org will be your … END_OF_DOCUMENT_TOKEN_TO_BE_REPLACED