The ASPCA® (The American Society for the Prevention of Cruelty to Animals®) is celebrating the two-year anniversary of “Operation Pit,” the program that offers free spay/neuter or vasectomy surgeries to all healthy pit bulls and pit bull mixes between the ages of three months and six years living in the five boroughs, along with free vaccinations and micro-chipping. 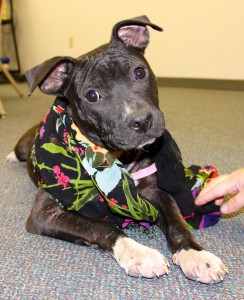 Throughout the year, Operation Pit procedures take place every weekday at the ASPCA’s Bergh Memorial Animal Hospital in Manhattan.

Since its launch on July 15, 2010, 1,308 surgeries have already been performed through Operation Pit.  “We are very pleased with the success we’ve had over the past two years and are encouraged by the continued demand for these services,” said Dr. Louise Murray, vice president of the ASPCA’s Bergh Memorial Animal Hospital. “The ASPCA is committed to improving the health and well-being of pit bulls and pit bull mixes in New York City.”

In addition to a free spay/neuter or vasectomy surgery, vaccinations and micro-chipping, dogs that have the surgery will also receive free K9 camouflage “doggie gear” and a post-operative “honorable discharge” for completing the mission.

Outside of Operation Pit, pit bulls and pit bull mixes make up a very small percentage of dogs that are brought in for routine spay/neuter procedures at the ASPCA’s Bergh Memorial Animal Hospital. Pit bulls also have large litters compared to other breeds, and they make up an overwhelming majority of homeless dogs found in city shelters. “One of the most effective ways to reduce the number of pit bulls ending up in shelters is to provide free spay/neuter services,” added Dr. Murray. “By participating in this program, people are doing their part to combat the overpopulation issue while at the same time providing invaluable health benefits to their dogs.”

More than 40,000 homeless pets enter city shelters each year. Reducing this number depends on increasing adoptions and decreasing overpopulation. Between spay/neuter surgeries done at the ASPCA’s Bergh Memorial Animal Hospital and those performed by the ASPCA Spay/Neuter Operations team, the ASPCA has spayed and neutered approximately 20,000 cats and dogs so far in 2012. Nearly 36,000 procedures were done in 2011. However, the vast majority of dogs that are still euthanized due to lack of homes are pit bulls and pit bull mixes. With programs such as Operation Pit, the ASPCA hopes to reduce this number.

All appointments for Operation Pit must be scheduled prior to the surgery date. All procedures are completed the same day, and owners can drop off and pick up their pets at scheduled times. For more information and to schedule an appointment, owners can call the ASPCA’s Bergh Memorial Animal Hospital at 877-900-PITS (7487). Details can also be found online at www.aspca.org/aspca-nyc/operation-pit.aspx.

Appointments can also be scheduled for every other Sunday at the ASPCA’s spay/neuter clinic in Glendale, Queens by calling 877-SPAY-NYC (7729-692).

About the ASPCA®
Founded in 1866, the ASPCA® (The American Society for the Prevention of Cruelty to Animals®) is the first animal welfare organization in North America and serves as the nation’s leading voice for animals. More than two million supporters strong, the ASPCA’s mission is to provide effective means for the prevention of cruelty to animals throughout the United States. As a 501(c)(3) not-for-profit corporation, the ASPCA is a national leader in the areas of anti-cruelty, community outreach and animal health services. For more information, please visit www.ASPCA.org, and be sure to follow the ASPCA on Facebook, Twitter, and Pinterest.

NewYorkCityDog.org is committed to keeping local dog lovers informed and entertained.  We’ll keep you up-to-date on local news and events, shelters and dog-friendly activities. By bringing all of the elements and resources together in one canine-centric matrix, NewYorkCityDog.org will be your … END_OF_DOCUMENT_TOKEN_TO_BE_REPLACED