by Lauren R. Tharp
There are several varieties of bulldog: The American Bulldog, the French Bulldog, and the English Bulldog. The latter could be considered the “winner” of the bunch as it is the most famous and has earned the right to be referred to simply as “Bulldog.” The Bulldog is the mascot to 39 American universities, the official mascot to the United States Marine Corps, and is a popular character in cartoons—including Spike from Tom & Jerry and Hector the Bulldog from Looney Tunes! First recognized by the AKC in 1886, the Bulldog is now the 14th most popular breed in the United States. 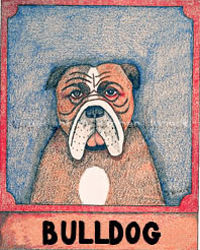 Physical Traits
Size & Weight: Bulldogs are medium-sized with adult dogs weighing in at 50-60 pounds and adult bitches weighing 40-50 pounds.
Coat & Color: Short-haired with glossy straight hair close to their bodies. They are available in the following colors: Brindle (They come in all varieties of brindle, but red is the most common and generally most desired), solid white, solid red, fawn, fallow, and piebald.
Other: The name “bulldog,” or rather “bull dog,” comes from the bulldog’s original occupation of being used in the sport of bull baiting, a blood sport in which the dog was pitted against a chained up—but very angry!—bull in a fight to the death.
Life Expectancy: 8-12 years.
Temperament
While the above may lead you to believe otherwise (“They fought will bulls and won?!”), bulldogs tend to be more courageous than they are vicious. Kind-hearted and dignified, these dogs are well-suited to urban and apartment living. This dog can be described as a “lifelong puppy” and will never lose their early enthusiasm for life. A family dog to their core, bulldogs should never be left alone for extended periods of time or their loneliness can drive them—and you!—mad, leading to destructive behavior.

Pros
• Require very little exercise and, in fact, tend to do better without it.
• Gentle with children if socialized early. Will become an instant “member” of the family rather than just a “family pet.” You may even forget it isn’t one of your actual children!
• Bulldogs make excellent watchdogs.

Cons
• Craves constant companionship/attention! If left alone, bulldogs can become very destructive.
• Require moderate to heavy obedience training (depending on each dog’s individual personality). The phrase “stubborn as a bulldog” doesn’t come out of thin air! Bulldogs can become willful and challenge you for dominance if you don’t show them who’s boss early on. But you’d probably think you were a pretty tough guy too if you came from a line of bull conquerors!
• Doesn’t do well in heat or humidity.
Looking for a Bulldog? Please contact the Long Island Bulldog Rescue to learn more about their adoptable dogs.
A special thanks to Dog Mountain for use of this featured image of the Bulldog.

NewYorkCityDog.org is committed to keeping local dog lovers informed and entertained.  We’ll keep you up-to-date on local news and events, shelters and dog-friendly activities. By bringing all of the elements and resources together in one canine-centric matrix, NewYorkCityDog.org will be your … END_OF_DOCUMENT_TOKEN_TO_BE_REPLACED