The Beagle: Number Five with the AKC, but Number One in Our Hearts! 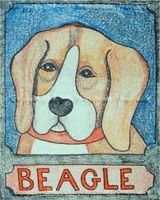 What do Shiloh, Snoopy, and Underdog all have in common?  They’re all Beagles!  It would be insulting to claim that a Beagle “ain’t nothin’ but a hound dog” but they are in the Hound Family.  The Beagle has long been considered a “favorite” dog (since the 1500s!) and currently reigns as the 5th most popular dog in the United States according to AKC registration records.

Energetic and friendly, Beagles may be short on height, but tall on personality!  The Beagle was officially recognized by the AKC in 1885.

Size & Weight: Beagles are a smaller breed and are generally only 15 inches tall at the shoulders.  As for weight, twenty pounds is about the “average” for Beagles; however, Beagles have a tendency to want to pack on the pounds in their later years and can sometimes end up being much larger.

Coat & Color: Beagles have short hair and can be found in any of the typical Hound colors.  The most popular/recognizable color for a Beagles coat is the brown-black-white tri-color coat.

Other: Beagles are similar in appearance to a Foxhound (but much stouter!).

Temperament: Beagles are naturally curious and tend to follow their noses—which makes sense since, outside of the Bloodhound, the Beagle has one of the most highly developed senses of smell of any of the recognized dog breeds!

Known for being affectionate and good-natured, the Beagle is often thought of as the perfect “family dog.”  Beagles are friendly, energetic, and enjoy having company (whether it’s from humans or other dogs).

If you are looking for a beagle, we recommend contacting Beagles of New England States (B.O.N.E.S.).

NewYorkCityDog.org is committed to keeping local dog lovers informed and entertained.  We’ll keep you up-to-date on local news and events, shelters and dog-friendly activities. By bringing all of the elements and resources together in one canine-centric matrix, NewYorkCityDog.org will be your … END_OF_DOCUMENT_TOKEN_TO_BE_REPLACED