Animal advocates gathered yesterday with signs and passionate pleas to revamp the New York City Animal Care Control department at the Department of Health at 125 Worth Street. 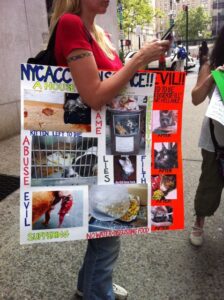 Although the meeting was presented as open to the public, citizens were denied access to the gathering. Officials directed protesters to line up and discard their signs but later were told that there was not enough room to accommadate. Seven people were allowed to enter, and reported back that although the meeting was in a small room – a huge room was available just down the hall. 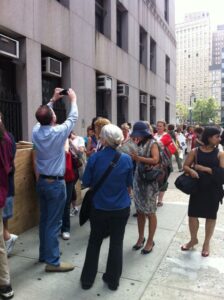 The Board refused to accept petitions, and refused to answer questions. During one citizen’s statement, a board member was busy texting on his cell phone. Julie Banks, Executive Director of Animal Control stated to the disbelief of attendees that conditions are improving in the shelter.

Had enough? Visit this Care2 petition to make a change:http://apps.facebook.com/petitions/1/Board-Members-of-NYCACC-we-ask-that-you-resign-if/?ref=mf

Interested in meeting other people with your concerns? Visit Meetup.com and search new york animal rights.

Thanks to Jessica Miracola for this Special Report to NewYorkCityDog.org

NewYorkCityDog.org is committed to keeping local dog lovers informed and entertained.  We’ll keep you up-to-date on local news and events, shelters and dog-friendly activities. By bringing all of the elements and resources together in one canine-centric matrix, NewYorkCityDog.org will be your … END_OF_DOCUMENT_TOKEN_TO_BE_REPLACED