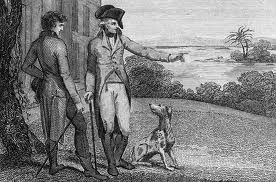 Statistics show that one of three American households have a dog but if your house is The White House, that ratio increases dramatically.  More than half of our presidents have enjoyed the companionship of a dog.

George Washington turns out not only was a founding father but a breeder of hunting dogs.  He bred his own black and tan dogs with the French Fox Hound to create a new breed:  The American Foxhound.

Abe Lincoln adored his dog Fido.  A Labrador-hound mix, Fido was ratttled by commotion and loud noises.  Lincoln feared the pup would not cotton to life in Washington, DC.  He found a family in Springfield to care for his dog and Lincoln helped by picking up the tab for Fido’s care. Ironically, just days after the president was shot, a drunken man killed Fido.  Details are murky.

Our 33rd president, Harry S. Truman coined the famous phrase, “If you want a friend in Washington, get a dog.”  I’d like to say that Truman’s long life could be attributed to his love of dogs, but at least two of his pups were re-homed, presumably because they were “inconvenient”.

In addition to dogs, goats, ponies, raccoon and birds at one time have called the White House Home.

Many thanks to the Smithsonian Institute and the National Archives for these digital images.

The Johnson's and dog

Khruschev gifted the Kennedy's with a puppy

NewYorkCityDog.org is committed to keeping local dog lovers informed and entertained.  We’ll keep you up-to-date on local news and events, shelters and dog-friendly activities. By bringing all of the elements and resources together in one canine-centric matrix, NewYorkCityDog.org will be your … END_OF_DOCUMENT_TOKEN_TO_BE_REPLACED