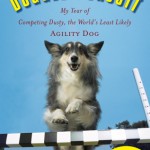 Robert Rodi is the Author of Dogged Pursuit  -My Year of Competing Dusty, the World’s Least Likely Agility Dog. Robert joins the Rover Reporter for some chat and giggles about learning the ups and downs of the agility circuit.

Agility became a serious commitment for Robert, first with Dusty and later with another dog.  Listen to his take on the world of agility.  Just click on the arrow to play.

NewYorkCityDog.org is committed to keeping local dog lovers informed and entertained.  We’ll keep you up-to-date on local news and events, shelters and dog-friendly activities. By bringing all of the elements and resources together in one canine-centric matrix, NewYorkCityDog.org will be your … END_OF_DOCUMENT_TOKEN_TO_BE_REPLACED